To celebrate our 30th anniversary, we’re telling 30 stories of God’s faithfulness in and through Fellowship North. You can read all the stories here.

God has changed (and continues to change) my understanding of race & unity through Fellowship North. In the fall of 2006, Harold & Dena Nash came to FN, and I really thought at that point that we had crossed a line. And we had, but it wasn’t the one I thought it was. I thought that we had basically done it – overcome racial barriers right there in our very own church. We had a black pastor and a white pastor. You could see the unity right there in front of us.

I didn’t even know what I didn’t know.

I didn’t know how hard it would be to see someone else’s side of things. To learn new songs, new ways of doing things. I didn’t know how easily I could be defensive about why I liked or didn’t like certain things. Or even about just being white.

I didn’t know that the thing I thought was the finish was really just the beginning.

Then, in January of 2008, after a year of prayer and planning, the leadership of our church brought out our new vision statement and began something called Talk It Out (now, this is part of Mobilize). They required the staff to go through it. And I needed it more than I could have imagined.

I needed to know that just by being born white in Arkansas, I have an advantage in nearly every single life situation I find myself.

I needed to hear someone say that my thought that things are equal now between races, that the injustices are all in the past, is like sitting down to play a game of Monopoly with a black friend. This particular Monopoly game has been played for generations now; our fathers and grandfathers and great-grandfathers played together too. Only some of those previous white players took all the hotels and controlled the bank and maybe punched their opponents in the face. And now I come to the game, with the wealth of accumulated resources behind me, and my opponent comes from a very different place – and even with the best of intentions, the game is not equal.

I needed to know, as someone who claims to follow Christ, that all these little fences we build in our lives and relationships and churches – well, they’re just wrong. And not wrong as in a social activist viewpoint-type way, but wrong in a Bible kind of way.

And I needed to know that I don’t have to feel bad about being white. That no one was trying to blame or manipulate me.

Most of all, I needed to see. 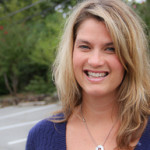 Today’s story is by Sarabeth Jones.

Sarabeth is a part of the Arts team at Fellowship North; she loves all kinds of art – writing, directing, acting, design, photography, dance – and is so glad that she gets to work with all of them (and wonderful artists, too!) as a part of her job. The only thing better…would be if she were on a cruise right now. She’s married to Bryan, mom to Elizabeth, Jonathan, and Will; she’s grateful that they still all make her laugh.