An Update from India 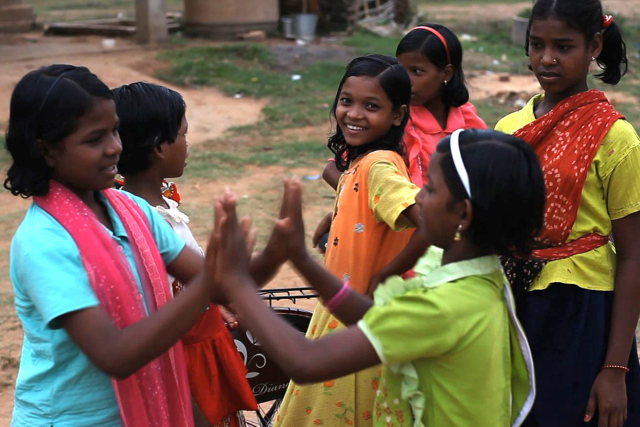 You may remember the Love and Hope Children’s Home in Orissa, India – Fellowship North first connected with them through Walt and Annie Manis (missionaries that FN supports) back in December of 2011. This orphanage and school takes care of the children of Christians who were killed in outbreaks of violence in India in 2008. Occasionally we hear about their progress and we got an update last week. It is long, but just precious, and a great picture of missionary work – sometimes things go great, and sometimes the potatoes don’t grow (you’ll have to read the letter to find out what that means…). This letter is from Suneli, the woman who founded the Home – she has just returned from a visit there.

I hope you all are doing well and have had a wonderful Easter Sunday! I visited Orissa last week. I just came back. All the children are doing really well.

Their final exams were over by the end of March.
The results have come out and all our children have passed and have been promoted to the higher classes. God continues to be so good to these children !!
I met the principal of their school and she showed me the details. They will be handing over the mark sheets soon. Among all of them Ribika, Sarita and Laxmi have scored the highest marks. Few of our kids have also been among the top in their classes.

All the 9th standards girls will be leaving the present school and will be joining the Girls High School which is a bit farther away.
Another good news is Laxmi Digal, got Rs 1200 and Eliyo Digal got Rs 800 as gifts from the school for their outstanding performance in education!
The principal has favour over our children. She is constantly supporting them in many ways.
We are still waiting for the results of the older 10th standard boys!

The children have left for holidays to their villages. Most of the parents and other relatives came to pick them up.
I met them in person and asked them about their present situations in their villages.
There are many good things happening with them.
Most of them are not facing any more problems of opposition there. They can openly pray and sing. They all celebrated Easter Sunday marching with dancing and singing from village to village.
Even the Hindus from the villages invited them to dance for them with Christian songs. They also offered them some gifts.
More than half of the villagers have given their heart to JESUS after the riots.
The reason was that they all had to face the same problems, they said, among the Christians, so they decided to follow Jesus of Christians instead of their gods. For example: In one day 15 to 20 families gave their lives to Jesus Christ. It’s just amazing!
One father said that in his village it was an elder of that village. He used to support the persecution of Christians financially. After the riot his wife got a  horrible sickness and could not get cured by any medication and doctor. Somehow one day, some Christians offered to pray for her that she would be healed and they prayed.  She got completely healed!!! As from that moment, his entire family believed in Jesus Christ.

Recently there was a Christians Conference of 5 days up there in the jungle area of where the children come from.  There were about 1300 pastors, leaders and believers participating.  For this conference they asked for help locally.  They got some rice and some money.  After the conference 400 kg rice and 5000 rupies were left overs, much more than what they started with. The Lord multiplied the rice and the money during the conference!!! How God is working is amazing!
They have all got their houses built. They have received the amount from the government according to the damage of their houses. In these villages life is not expensive, so they managed to built their destroyed houses. I think because of all the good things that are happening in Kandhamal (the place where the kids are coming from) and to the children that the opposition is trying to create a different problem.

As I was talking to Alma over the phone, I visited the collector of the Department of the Child Welfare of Nabarangur, to just make friendship but what she said was shocking to me.
First of all she said that we are taking very good care of these particular children and they enjoy everything better than the local children.  That is why they have decided to send them back to their parents and relatives, to the jungle Kandhamal.  The law got approved today and they want us to send back our kids to Kandhamal till 15th of April. She said that if we will take care of local children, we will not have any problem with the government, but these tribal children, should not stay anymore in Nabarangpur.   I asked her why and she said that the Kandhmal children are better off than local children and the Christians give a lot of money for them, so they do not like that.  I tried to explain to her that these kids have suffered a lot and finally they could enjoy a bit to be children, have education and grow up in peace and with love.  They have no schools in the jungle, so how they can go back?  What would they do there? She seemed to not bother to give any answer to my questions.

These are so bad reasons, but it is just jealousy and envy.  This is pure discrimination, which we will have to stand legally with our lawyers.

LAWYER: I will have to go soon to Bhubaneswar, a city in Orissa, where our lawyers have the office.  We have to appeal to the higher court to bring justice and fight against this discrimination. Our lawyer is a Christian and specialized in discrimination issues, working for other NGO and organizations that have faced issues like we do face now.  He is very optimistic that we will win this case.  In the meantime, the other 9 leaders of the children’s home who have received the same letter, have called Suneli to ask for advice.  She is calling them to get also lawyers and together to appeal to the high court of Orissa State.

I spoke to the Lawyer on the phone and he said this is our right that any Indian citizen can study, work or stay anywhere in India and there is no such law in India.  The fact that there is a law like this in India would work in our favor.

It is only the jealousy of the local people. They are not able to tolerate that our kids are doing well and that on top we are Christians.  Mostly they are very jealous about us because we are giving very special care to the children and we have built the house so soon, the collector mentioned.
So they just want that every thing close down.

I strongly feel they will not succeed in their evil plan. Victory belong to us and we will get the victory. Our motives are right and we serve a God of the Impossible. If God is for us who can stand against us?? Let us all stand together in prayer, trusting HIM.

Darryl is not in the children’s home since some days. He has gone to Calcuta. He will probably visit different parts of India and plans to go back to Switzerland in the beginning of May.

Sarada, the former employee, who has worked in the children’s home for more than a year, has left and will not come back, because she has to take care of her sick mother in another village.

LATA: We have appointed Lata about 23/24 years old lady as a cook. She is very hard working and does all her work alone. Twice a week she gets help from another lady, whom we have appointed part time. She is from a near by village.
Lata has a talent in dancing. She is teaching the children how to dance. They are learning very well. On Easter Sunday evening we had a very good time with also a dance program.

TIMON and his wife: We have decided to hire Timon and his wife to help in running the children’s home along with Rabindro and Sarah who are doing an excellent job.  Timon used to be Darryl’s translator and he has good knowledge of English, is good in administrative and paper work and is an educated man.  His wife is also a hard working person and both seem humble people.  They have 4 children, one boy, who lives and works in south India, one girl 16, who does not go to school, one girl 14, who is studying with our kids and another boy, born blind in one eye who is 10 year old and goes also to school with some of our kids.  For three months will be a provisionary time and we will decide afterwards whether we will offer them a permanent position.  Right now they leave in the house with Rabindro and Sarah because there are no kids.  When the kids will come back, they will rent a place in a nearby village and commute everyday to the work.  If we see that they are good and do a good job, we will hire them full time and they might live in the children’s home.  It all depends how they will work.  It is very hard to find trustworthy people in this part of India, and Timon seems to show these qualities which we would like to see.  Please pray that we have wisdom in dealing with the staff.  As all children have left for their villages, only Rabindra’s family and Lata ,Meera (the slightly handicapped lady) were there. They were alone. So we have decided to let Timon’s family come and stay with them till the children are back.

All his children are physically fine except for the younger boy who is blind in one eye.
The girls are very good in doing all sorts of work. I spent a few days with them. I feel good about them.
We will see how it works out in the future.

POTATOES PROJECT: The potatoes project did not go well. The plants grew up very well, but I think they were not given proper care. Darryl left for visiting different parts of India and the children were having their final exams. Sarada left because her mother was not well.
The amount of potatoes, money, energy, amount of water they invested, was not compared to the harvest we got. I think about ten kilos of very tiny potatoes was all that we got.

While they were digging for the potatoes, Aubo got hurt on his head. He had to get two stitches in the hospital.
He is o.k.now and the stitches have been taken out.

CHILDREN: Some of our children do not drink enough water. It is too hot in Nabarangpur.
Sukant Digal had blood vomiting twice. He is under medication now.

Saibani’s younger sister was admitted in the hospital, so her father called us to request to let Saibani go and see her sick sister. So, Saibani and her little brother Akash, have gone to their village. Please keep these children’s safety and protection in your prayers.

Every thing else is fine. Any other news I will let you know.

Thank you so much for standing with us in prayer. I appreciate all of you for the great heart for these Children!

With love and blessings!!