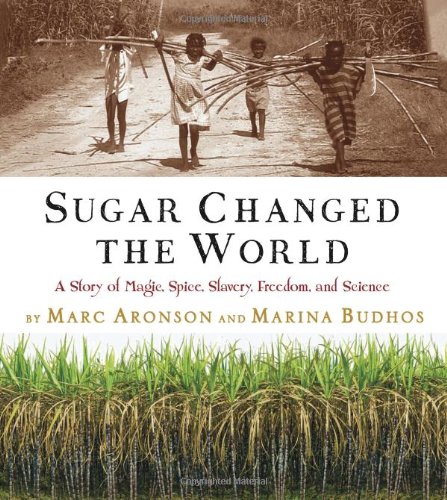 I picked this book up in the Children’s Department at our library a while back.  It is a haunting history of sugar.  I had never understood how much the desire for sugar in England (and around the world) drove the slave trade in the 1700s.

In the bibliography, I found that a book was often sourced called Bury the Chains, which I’ve been reading this month.  It’s a history of the battle against slavery in England.

This book tells the fascinating individual and collective stories of a handful of men who are responsible for finally bringing an end to slavery. On the cover of the book to the left is Olaudah Equiano, whose autobiography was a key factor in the fight against slavery.  Somehow, because slavery was happening so far away from home for so many people in England, they connected to the brutality of Equiano’s story.  In addition to writing his story down, Equiano told it to crowds of people all over England.  People grabbed hold of his personal testimony and began to stand up against slavery.

One of the ways that English people bonded together and stood up against slavery was to boycott sugar. It continues to surprise me how much sugar shows up in this story.  Both the desire for it and the refusal of it seem to have moved the world in significant ways. There are lots of numbers in both of these books, but this following quote most illustrated for me the need for the sugar boycott in England.

One final set of grim numbers underlines the way slaves on sugar plantations were systematically worked to an early death.  When slavery ended in the United States, some 400,000 slaves imported over the centuries had grown to a population of nearly four million.  When in ended in the British West Indies, total slave imports of two million left a surviving slave population of only about 670,000.  The tiny French island of Martinique took in more slave imports over the years than all thirteen North American colonies, later states, put together.  The Caribbean was a slaughterhouse.

Reading the first book, Sugar Changed the World, was enough to make me want to harvest my own sugar in the backyard instead of buying it off the shelves at the store.  Because even today, sugar and chocolate are among the most inhumanely harvested crops in the world.

The abolitionists succeeded because they mastered one challenge that still faces anyone who cares about social and economic justice: drawing connections between the near and the distant.  We have long lived in a world where everyday objects embody labor in another corner of the earth.

Today’s post is by Alison Chino – she blogs here and twitters here. Married to Taido and mom to Cole, Mary Polly, Ben, and Simon, she loves cooking, reading, yoga, and travelling.