We hope you’ve enjoyed these daily advent posts as much as we have. Thank you to the many artists at FN who have contributed! Remember, past posts are archived here.

Jack obsessed over every stage of her pregnancy, every aspect of their soon-to-be family, every possibility of their unknown future and the surreal series of events that had unfolded over the past several months, but he never pictured Marisa going into labor during an ice storm, on the interstate, in the back seat of his truck. Considering everything that had transpired, he could not imagine leaving her with her mom; she would not have left his side anyway. In this moment, though, he was flushed with distress for bringing her along.

Jack’s only option was a short-term job in Memphis. He was thankful for it. Work had been slow for framers down in Pine Bluff for a long time; they were tearing down more houses than they were putting up. Times were especially tough for a young guy with such little experience. What work he could get was not paying enough to keep the lights on. This solution would have to pan out, as the baby was due soon. After finishing up a supper Marissa scrapped together with everything left in the fridge, Jack packed the truck. Everything the young couple owned fit easily under the blue plastic tarp now tied over the rusty bed of his Chevy. Since rent was up, and the boss expected Jack first thing in the morning, they hit the road sometime after ten that fateful evening. Neither of them thought to check the weather. With only each other, a few belongings, the hope of tomorrow and without a place to turn back to, they had no choice but to push through the weather. Their sojourn was complicated with the misapplication of a brake on the frozen road.

Uncomfortably positioned in the crew cab of Jack’s pickup, which could do little more than spin tires on the iced median at two a.m., Marisa was too beginning to regret her decision to go along. The due date was still another month and a half away, and like Jack, Marissa never expected the baby so soon. She had not expected any of this after all; she had big dreams. The preacher back home had gone on and on about how the Lord would bless those who are faithful to him. She had been faithful and counted her blessings, but did not understand many of the events of the past year. Folks back home silently, and not so silently, judged Marisa and Jack for this unwed pregnancy, but they knew nothing of the reality. The two set a date for June, and despite the seemingly obvious, they had indeed been faithful to their promise of chastity. Jack and Marisa thought it best not to reveal the truth because no one would understand or want to admit it anyway. Daydreaming, Marisa sometimes pictured comic book superheroes, figures like Dr. King and Lincoln, and even Jack in her mind’s eye, as she resolved that her son might even save the world one day. The anticipation of the new baby, their new family, and the unknown future, combined with her reflection upon an inexplicable series of events had been a tumultuous sea of emotion.

Despite all of Marisa’s well-formed plans being annihilated before her very eyes, she chose joy even as the whole experience was culminating in the backseat of Jack’s truck at mile marker thirty-three. Shortly before the salvation of blue flashing trooper lights appeared against the backdrop of dark white in the rearview, Jack delivered the child. Perhaps their peace rose from the complete silence of the icy highway. Perhaps it was born along with the miracle in Jack’s hands. Perhaps peace is just the beautiful grace of God alone, in its simplest form, but as Jack placed the boy in Marisa’s arms, all the anticipation, confusion, anxiety and questions of both young parents fell still and quiet down into a deep, whole and eternal love. 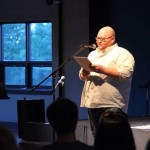 Jeremy has been a part of the Fellowship North community since 2007, serving in childrens’ and student ministry for most of that time, currently ring-leading the freshman boys. He is a hospital finance guy by day and a little bit of everything else by night–from aspiring author to zymotechnic enthusiast. Jeremy also volunteers with STEP Ministries in Eastgate and suggests that you sign-up to do the same.