The Songs of Christmas: Day 22

Every day ’til Christmas, we’re sharing a story from your family at FN. Would you rather get them straight to your inbox? Click here and choose “The Songs of Christmas: (Daily Emails Dec 2015).”

Let me preface my words with a dash of hope. Craig said something beautiful on Sunday and I want to begin with his thought so that you don’t give up before I finish.

On Sunday, Craig said, “I don’t have to be sad, because God is in charge.”

I used to ruin Christmas annually by thinking I was in charge. As early as I can remember, I concerned myself with one thing in November and December: acquisition. The child and adolescent Andrew Whitley spent an excessive amount of energy conspiring to get exactly what he wanted each year. After all, other than my birthday, Christmas was the only day when one could score big and get the expensive things that a meager allowance could never afford. Unfortunately, my father’s job made it possible to feed the greedy Christmas monster I became. Most years provided a solid pay off. On a bad year, I did my best to hide my tears or anger. (That’s right—tears and anger. Did I mention I grew up privileged? So sad.)

In 2007, a phone call from my mom completely changed the way I saw Christmas. She told me she had left my dad and all the reasons why. The pain of the moment was simply unbelievable. A few months later we had our first broken Christmas. A new darker season of life began. No longer interested in stuff, I only wanted a whole family again. Knowing each year after this one would be a disappointment—Christmas became the darkest day of the year. I quickly became the Grinch, the Scrooge, the hater of all things merry and bright. I accumulated arguments and facts like arrows in a quiver ready to fire at anyone brave enough to defend the 25th day of December.

Then I met Emily.

Those words speak for themselves if you know my wife. She has an unstoppable level of joy and love year round which only quadruples as the days get shorter each winter. I’ve done what I can to resist, but honestly, she makes me want to enjoy Christmas. Let’s not forget about Mabel and JR! Being a parent makes me want better for my children. I want them to know what Christmas is really about and I want it to be a celebration of Jesus and a time of year when we worship Him and give more because He gave so much. I don’t have to be sad anymore because God is in charge and He’s made me a part of a whole family forever.

This song has become a favorite because it reminds me of my wife’s unstoppable Christmas spirit – I think if she were to write me a Christmas song, this would be exactly what it would say.

Today’s story is by Andrew Whitley, and we’ve linked to his favorite Christmas song below. 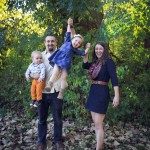 Andrew Whitley works with middle and high school students at Fellowship North. He came to FN when he moved to NLR with his wife Emily – she grew up in the student ministries here. Together they have a daughter, Mabel, and a son, J.R. Andrew’s latest hobby is learning to play the piano.