To celebrate our 30th anniversary, we’re telling 30 stories of God’s faithfulness in and through Fellowship North. You can read all the stories here.

Upon the invitation of friends Steve & Roseanne Mitchel, my family and I first came to Fellowship North, back when it was plain old “Fellowship” meeting at the YMCA. I must admit I was a little taken aback at first after growing up in churches where everything took place surrounded by dripping candles & stained glass. Thankfully my ‘surprise’ didn’t last long or deter us from coming back, because we found something else there; something that can’t be put into words but somehow smells sweeter than incense or candles. I know now it was the unmistakable aroma of Christ! It had surrounded us from the moment we walked in as it flowed out of authentic relationships with a living Lord and Savior. We were intoxicated and wanted more! (Still do!)

Back then my husband Iggy and I would’ve described ourselves as Christians and we were “Saved”, but I believe God wanted more for us than our stamped ticket to heaven. What Christ wanted for us then and still desires now is something much more intimate. It wouldn’t be long during our first years at Fellowship before we got a taste of this kind of intimacy. In our second year there we had a beautiful daughter named Elizabeth Bailey. Elizabeth had dark hair, long black eyelashes, cheeks as soft as silk and the most kissable turned up nose on the planet! She was also born with a disease called Krabbe that often claims the life of children before age two. We were immediately surrounded by Christ-followers! Followers who were willing not only to bear witness to our pain, but to enter into it with us. They did this through prayers for a miracle (which I still believe are possible), meals and nights out when we were weary, ears to listen, shoulders to cry on – but most important to me was their willingness to love our beautiful Elizabeth along with us. I know this sounds easy, but in many ways I believe it’s the hardest decision of all to make, because when you allow your heart to remain open to love you also invite pain.

Elizabeth went to be with Jesus in July of 1989; we missed her 1st birthday by two weeks. Yes, our hearts were broken, but none of us were left hopeless. Remember that “aroma of Christ” I mentioned earlier? I’ve come to know through my Mom and the people here at Fellowship that believers carry that aroma with them wherever they go; whether they’re standing within the walls of Fellowship North, in line at Kroger, at Eastgate, or standing at the bedside of a little girl at Children’s Hospital. It’s born of grace – the same grace Jesus gave us when he went to the cross and the same grace He wants us to extend to one another.

Iggy and I are happy to still call Fellowship North home and we embrace the mission to make disciples of all people and the vision to mobilize a racially unified family of God. It’s our belief that the world needs that kind of grace and so do you and I. 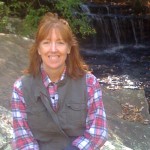 Today’s story is by Sheila Cabrera.

Sheila and her husband Iggy have two grown children, Dan & Rebecca. They first started attending FN back when it used to meet at the Sherwood YMCA. Iggy spent 20 years in the Air Force & during that time traveling stateside and abroad they attended numerous churches. They visited some that extolled the Truth, but demonstrated little love and others that seemed to have an abundance of what appeared to be “love”, but very little Truth. What she’s always appreciated most about FN is that it doesn’t separate one from the other. She also runs a jewelry design business named BrixLoft with business partner Hannah Little.