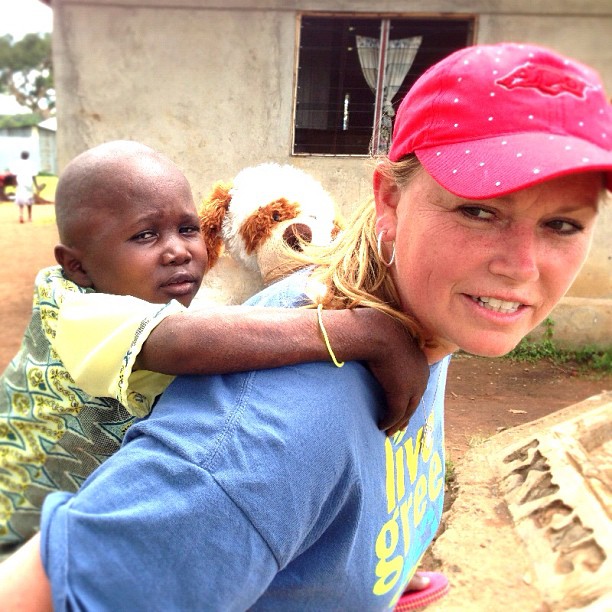 Many of you have heard the story of Joshua, an orphan who Sandy Boultinghouse met and rescued during her last stay in Kenya. He was ill, having suffered years of abuse and neglect, plus the effects of general poverty. Under Sandy’s care, he came to live at the Kenya Relief orphanage, where he got stronger and healthier (although he continued to be quite susceptible to illness). The members of the last two mission teams (last November & this July) also got to know Joshua during their visits to Migori. Sadly, last week Joshua’s heart gave out after his most recent sickness. Sandy wrote this tribute for the memorial from Kenya Relief.

A Tribute to the Life of an Amazing Child of God

Little did I know when I was walking to see my deaf friend Lilian, would I find this little guy in the neighboring village. The impact he had on all of our lives in such a short time is amazing. In October 2012, Lilian was feeding Joshua with the little she had and he was more or less ‘hanging out’ at her mud house. You see, his parents abandoned him and left him with his 80 year old grandmother. I knew he was very sick when I first saw him. He was suffering from severe malnutrition and stood at about 3 feet 5 inches tall. He was 12 years old. He had been sick and not attending school since the 3rd grade. We could see he was very bright and communicated well with his English.

I immediately sought out one of our Kenyan nurse friends and We took him to the hospital . Within 5 weeks, he had been admitted to 2 other hospitals as well hoping to see how he could be helped. It was an uphill battle for him and Kenya Relief decided with the District Children’s officer, that he should stay at Brittney Home of Grace. From the CEO, Steve James, to the kitchen staff, dorm parents, social workers, team members, we all tried to meet his special needs to get healthy. The children were slow to adjust to his special treatment but soon embraced caring for him because of his endearing personality and bright mind. While we were there, we heard him actually say to the other children….. “ YOU PLAY TOO MUCH, YOU SHOULD BE READING (studying), YOU DON’T KNOW HOW LUCKY YOU ARE TO BE HERE”.

The abuse that Joshua suffered before he came to BHOG (neglect, physical and mental abuse, malnutrition) was revealed slowly as we offered counseling and spending time with him. This abuse was overshadowed by his attitude and personality as everyone got to know him better. Amos, the dorm dad was especially sensitive to his mood swings and I praise him for his wisdom beyond his years in dealing and caring for him.

Joshua was especially proud to start back to school at the grand opening of Kenya Relief Academy. He secured position number 1 in his class and loved being on the Flag team and Performance team for the school. He was so ‘smart’ in his uniform and new shoes. It was a blessing to see his gratefulness in all of that. Throughout the year, he had several trips to the hospital, tests done in Kisumu, and eventually was taken to Nairobi hospital. After coming back to his Brittney Home with new meds, his little heart just failed him and he died in his sleep.

I am touched personally that God saw fit to lead us to Joshua and help him love his life again, have hope, and start believing in our Lord . The vision that I want to hold on to is that he is welcomed into his heavenly home by Brittney and that they are telling many stories in Kiswahili and English and knowing how both of them loved to read, they are sharing books I am sure!!!

We will miss you Joshua.